skip to main | skip to sidebar

The Major’s Story: A Racycle Odyssey 100 Years Ago

These days most antique bicycles are ridden only rarely. A terrific exception is the Wheelmen’s century in which Wheelmen ride 100 miles in a day on bicycles built in 1918 or earlier.
But those same antique bicycles were once new and modern conveniences of transportation. As such they were ridden plenty, but typically just for local trips; long-distance bicycle touring was never commonplace.
One of those rare and adventurous early bicycle tourists was the intrepid Major Edward Augustus Weed, who rode out of New York City on a Racycle Pacemaker in 1908 bound for Estrella, California. For his coast-to-coast journey, the major took his time to take in the sights. In all he rode 8,145 miles “on a Racycle Pacemaker in 18 months and 25 days, in 25 states…across uncle Sam’s big ranch….” The major might not have realized it, but during his trip the world had changed with the introduction of the M 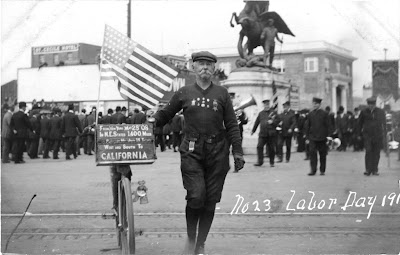 odel T Ford.
We know of the major’s adventure because in 1910 he self published a brief description of his Racycle travels in a booklet entitled The Major’s Story. The Miami Cycle & Manufacturing Company offered in its advertisements to send a copy of the booklet, along with a current Racycle catalog and other promotional goods, to anyone writing to the factory and sending along a two-cent stamp to cover return postage. The quoted excerpts in this post are reprinted with the kind permission of the copyright holder, who is the great grandson of Major Weed.
The Route
Major E.A. Weed was not one to take the direct route when there were interesting places to go and things to see. Starting from New York, he traveled up to Maine, then back south again along the eastern seaboard to Virginia before turning inland. He meandered westward through West Virginia, Ohio, Indiana, Illinois, and Iowa, then turned south through states along the mighty Mississippi until he got to Arkansas. He then continued roughly westward again through Oklahoma and Texas and the American Southwest to California. The major reached Estrella, California, on December 23, 1909.
About his route, Major Weed wrote, “My intention has not been to make any records for distance or speed, for I have often gone hundreds of miles out of my way to see any interesting locality or wonder of nature. Hence, the distance I have traveled is more than enough to have gone direct from Portland, Maine, to Los Angeles and back again…. No grander and more comprehensive way of seeing the vastness of our country can be obtained than by riding a wheel [bicycle] leisurely and taking in every point of interest.”
The Racycle 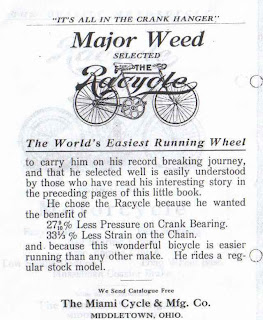 A transcontinental bicycle trip is still a significant undertaking today even with paved roads and good maps. The fact that the major undertook his journey 100 years ago on a Racycle Pacemaker is nothing short of heroic. The rider had to be self reliant because the route was only very sparsely populated, and the few roads that existed were bad. “…But don’t think it was a boulevard, for much of the way is rough.”
The Racycle Pacemaker seems an unlikely choice for the trip because its front sprocket was so large (40 teeth, 1-inch pitch chain) that it typically resulted in tall gearing despite the range of rear sprockets available. (The actual gearing of the major's Pacemaker is not given in the story.) Nevertheless, the major was enthusiastic about his Racycle. For instance, when “poor Racy Pacy was ground to pieces on a trestle bridge by an express train, (the only thing that can smash a Racycle),” the major waited for a replacement Racycle to arrive rather than continue his journey on an inferior bicycle. He described the train incident thus:
“On the 12th of April, 1909, on a trestle bridge near Algodones, New Mexico, where I was walking across, I was suddenly overtaken by a California Limited on the Santa Fe and saved my life by jumping 15 feet to the dry sand below, but my wheel fell on the track and was crushed to pieces. The saddle, handlebars, pump, and my watch were uninjured and are still in use on the second wheel the Miami Co. sent to Albuquerque. The broken wheel I had ridden over 10 months in 23 states, 5,955 miles, and it was in perfect order, and would have been all right now had it not been demolished by the train.”
Express trains notwithstanding, the major had prepared his Pacemaker to survive the predictable hazards of the journey. He wrote that he used heavier gauge spokes and wider tires typical of tandem bicycles. The wider tires may have helped on the miles of sandy tracks that passed for roads.
His Pacemaker had a 24-inch frame and was equipped with a Musselman coaster brake, which was built in-house at t 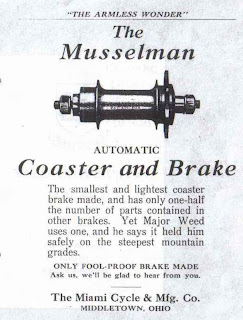 he Miami Cycle & Manufacturing Company. When coaster brakes were still something of a novelty in 1908 and 1909 (most bicycles had fixed hubs), the Musselman brake was reported to work better than most and was simpler to maintain and repair. The Musselman was unusual in that it had no brake arm strapped to the chain stay but relied on an elegant design feature whereby the braking action was instead imparted into a lug that fit neatly into the rear dropout of the frame. For this reason, the makers termed it the “armless wonder.” Major Weed was of the opinion that it was a fine piece of equipment. “In descending mountains for several miles, I found that my Musselman brake would hold the wheel all right, and it was really marvelous to see the tremendous strength of the little ‘Armless Wonder’ not to mention the feeling of safety and security in coasting down those perilous grades.” The performance of the coaster brake is all the more surprising considering that the major claimed the loaded weight of his Pacemaker was over 90 pounds, “and over 100 pounds when canteens are full of water.”
The Rider
Reading The Major’s Story 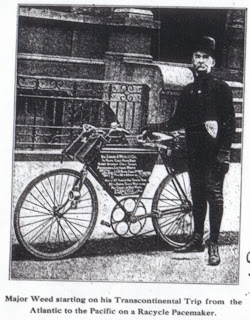 one is impressed as much by the author’s character as by his physical achievement. Major Weed seems to have been a free spirit in the sense that he had a singular passion for travel, but he also understood that satisfying this passion was his means to a contented and healthful life. In this respect, one could compare him with John Muir, who also appreciated nature for its own sake and for its transcendental qualities. Coincidently, Muir (born 1838) and Weed (born circa 1842) were nearly the same age, but Muir had already travelled and published widely by the time the major began his journey. Major Weed wrote, “I most heartily co 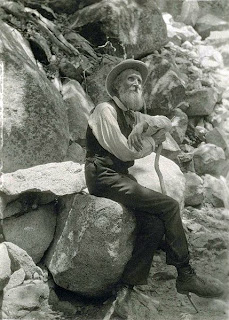 mmend bicycle riding and Racycle riding in particular as one of the very best means to see our grand country and come in closer touch with God and nature.” The accompanying photo of John Muir is from the Wikipedia entry (http://en.wikipedia.org/wiki/John_Muir).
Despite the major’s age and the hardships he endured, he logged “not a sick day on the whole trip, but perfect health all the time, for you see I am a healthy, hearty young fellow, and only 68 years young…. Though thoroughly drenched with rain by night and day on numerous occasions, I was not injured in anyway, not even taking cold.”
The Major’s Story is entertaining reading if only for its insights into its author’s attitude toward life. As stated above, he knew what made him a happy and healthy man, and at several occasions in the booklet he takes care to fill in the rest of us as to the secrets of his success. “Good food and plenty of it, as much sleep as convenient, entire abstinence from liquor and tobacco in every form, an even disposition, and an avoidance of fret, worry, and anger have been largely instrumental in contributing to my health and happiness…. When short of food or water I make my mind control my appetite and never allow myself to think about it, so I never suffer with hunger or thirst. We can overcome much of our trouble or sorrow if our mind is under proper management. God has given us the ability to be peaceful and happy under nearly all conditions and amid nearly all en 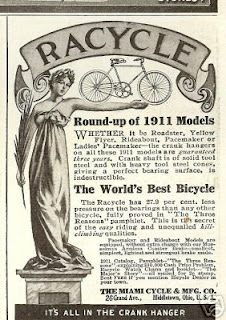 vironments.”
Consistent with his independent spirit, the major wanted his readers to understand that he was not in the pocket of the Miami Cycle Company, and they certainly were not holding his hand as he meandered across the US. Major E.A. Weed concluded his self-published travelogue with the following statement:
“I want it distinctly understood that I have had no salary or expense allowance from the Miami Cycle & Mfg. Co. of Middletown, Ohio, the makers of the Racycle, but rode that wheel because I believed it the best, and my long and hard ride has fully confirmed my former belief, that though there are possibly other good wheels, there cannot be any that compare with the easy riding, sturdily built Racycle Pacemaker.”
That was a century ago this year.

(Please note: The quoted contents of this post are protected by copyright and may only be reproduced with permission. The rest of this web blog post can be reproduced for educational purposes (no profit) without needing to secure permission.)

Posted by Racycle Crank at 1:22 AM

Got a Racycle Question?

If you have a question about anything here, or if you want to suggest a Racycle research subject, feel free to post a comment or email me at bgdoan@comcast.net.

Pacemaker Restored!: Revised 11-14-2009 in light of new information about the color.

Racycle Crank
In this blog, I'll try to make decent use of my training and experience in machine repair, history research and writing, and technical writing.